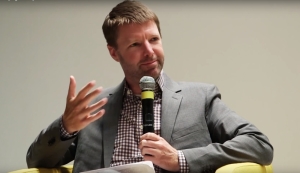 Tyler Green is an award-winning author, historian and critic.

With Dr. Kelli Morgan, Green is the co-founder of The Darkwater Project, which creates an anti-racist art history by revealing and interrogating historical American art’s role in the construction of white supremacy. Darkwater particularly applies research gleaned from whiteness studies and the related fields of genocide studies, critical race art history, and citizenship studies to historical American art.

Pulitzer Prize-winning art critic Sebastian Smee called The MAN Podcast “one of the great archives of the art of our time.” The BBC named the program one of the world’s top 25 cultural podcasts; The Guardian called it “indispensable,” and the Washington Post called it “one of the great resources for all art lovers.”  Among the many other media outlets that have featured the program are Agence France-Presse, The Los Angeles Times, Salon, Hyperallergic, the Dallas Morning News and numerous National Public Radio affiliates.

In 2014, the U.S. chapter of the International Association of Art Critics (AICA-USA) awarded Green one of its two inaugural awards for art criticism. The award included a citation for The MAN Podcast. (The other inaugural criticism award was given to New York Times critic Holland Cotter.) Green’s first book, Carleton Watkins: Making the West American, won the 2019 California Book Awards gold medal for contribution to publishing.

Green’s pioneering website Modern Art Notes, which was published between 2001 and 2014, featured original reporting, art criticism, and analysis of non-profit art institutions. Newspapers such as the New York Times, the Los Angeles Times and the Wall Street Journal all credited MAN with breaking stories that they later covered. The WSJ called Modern Art Notes “the most influential of all visual arts blogs,” and later added, “You won’t find a better-informed art writer than Tyler Green.”

Green has contributed op-eds to newspapers such as the Los Angeles Times, the Boston Globe, the Philadelphia Inquirer and the Wall Street Journal. His commentary has also aired on National Public Radio’s “All Things Considered.” Books featuring his work can be found here.

Also, he is tall.