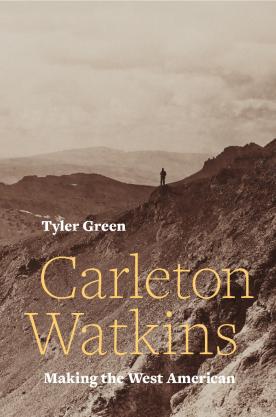 Carleton Watkins (1829–1916) is widely considered the greatest American photographer of the nineteenth century and arguably the most influential artist of his era. He is best known for his pictures of Yosemite Valley and the nearby Mariposa Grove of giant sequoias, especially for his 1861 Yosemite and Mariposa Grove pictures which helped motivate the invention of the national park.

Carleton Watkins: Making the West American tells the story of Watkins’s influence on California, the West, photography and art. Watkins’s 1861 Yosemite pictures were made just as the Civil War was beginning. They were exhibited in New York for the first time in late 1862 as news of the Union’s disastrous defeat at Fredericksburg was landing in newspapers and while the Matthew Brady Studio’s horrific photographs of Antietam were on view. Watkins’s work tied the West to Northern cultural traditions and played a key role in pledging the once-wavering West to Union. Motivated by Watkins’s pictures, Congress would pass legislation, later signed by Abraham Lincoln, that preserved Yosemite as the prototypical national park, the first such act of landscape preservation in the world. “Carleton Watkins: Making the West American” includes the first revised history of the national park idea since pioneering environmental historian Hans Huth’s landmark 1948 “Yosemite: The Story of an Idea.”

Watkins’s photographs helped shape America’s (and the world’s) idea of the West, and helped make the West a full participant in the nation. His pictures of California, Oregon, and Nevada, as well as modern-day Washington, Utah, and Arizona, not only introduced entire landscapes to America and its art, but were important to the development of American business, finance, agriculture, government policy, and science. Watkins’s clients, customers, and friends were a veritable who’s who of America’s Gilded Age, and his connections with notable figures such as Collis P. Huntington, John C. and Jessie Benton Frémont, Eadweard Muybridge, Frederick Billings, John Muir, Albert Bierstadt, and Asa Gray reveal how the Gilded Age helped make today’s America.

“[F]ascinating and indispensable… The lack of a Watkins biography was a gaping hole in our historical understanding of American art… Passages that analyze Watkins’ extraordinary compositions are among the book’s most revealing. ” — Christopher Knight, Los Angeles Times.

“This book is a thoughtfully researched meditation on a photographer’s complex contribution to the formation of our national identity…. Green’s research is not just about Watkins, but about the significance of the American West, and in some ways the definition of America itself… [M]uch like Watkins’s work, Making the West American is at once technical and transcendent.” — Maika Pollack, Aperture.

“This is highly effective scholarship that maps out art, politics and science.” — Stephen Clarke, The Art Newspaper.

“Beyond the dozens of sumptuous illustrations, what makes this biography worthwhile is Mr. Green’s prose and his dogged research… Mr. Green crisscrossed the United States in search of information about Watkins and has written what will likely endure as the definitive study of the artist.” — Andrew R. Graybill, Wall Street Journal.

“Green’s study of Watkins is full of drama… [he] builds a web of beauty and risk, of boom and bust, and of serenity and exploitation in and in between Watkins’ pictures. There are still plenty of shadows, but Green puts us in a better place to see into them.” — David D’Arcy, San Francisco Chronicle.

“[A] treasure of a book… the pictures are made to gain in stature not just in an artistic sense, but also in a larger societal one.” —  Jörg M. Colberg, Conscientious.

“Carleton Watkins is less a portrait of a man than an explication of America’s relationship to the West in the mid nineteenth century… To this end, Green skillfully weaves a web of historical context around Watkins, placing him and his photographs as connectors to major cultural, political, and industrial changes, most especially the burgeoning conservation movement, the railroad industry and settlement of the West.” — Megan K. Friedel, Oregon Historical Quarterly.

“Wise and lucidly written.” — Deborah Solomon, author of “Utopia Parkway: The Life and Work of Joseph Cornell,” and “American Mirror: The Life and Art of Norman Rockwell.”

“The San Francisco earthquake of 1906 destroyed much of the history of the West, but Tyler Green pierces that curtain of smoke in this innovative biography, recreating the life of photographer Carleton Watkins. Watkins emerges as a pivotal artist, a key player in the preservation of what is now Yosemite National Park, and a creator of the American environmental imagination.” — T.J. Stiles, two-time Pulitzer Prize-winning author of “Custer’s Trials: A Life on the Frontier of a New America.”

“Green’s achievement here is monumental. This book takes the familiar narrative of the formation of the American West and brings an entirely new perspective to it, beautifully positioning Watkins’s work within the history of California, and indeed the nation.” — Corey Keller, Curator of Photography at the San Francisco Museum of Modern Art.

“[T]he story of how Watkins came to photograph landscapes in California, Oregon, and Utah is both fascinating and prophetic… It is a book to be appreciated both textually and visually.” — Barry Silverstein, Foreword.

Carleton Watkins: Making the West American in the media